There is a giant car boot sale near me every Sunday. I don't often go, but yesterday I did. And I am so glad I did, for I found wonderful things: 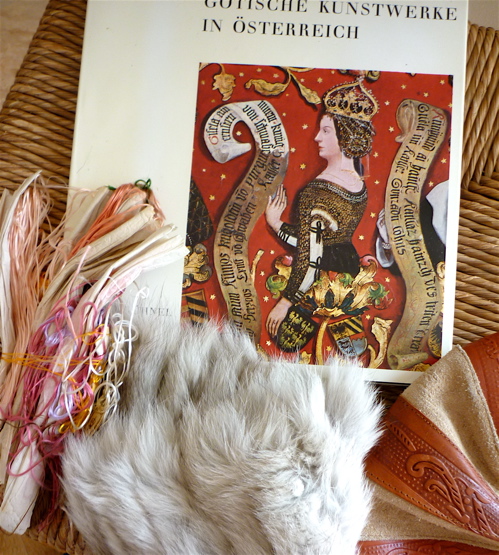 Tooled leather has to used in other projects. Or maybe I'll re-sew the stitches by hand and fashion it back into a purse. 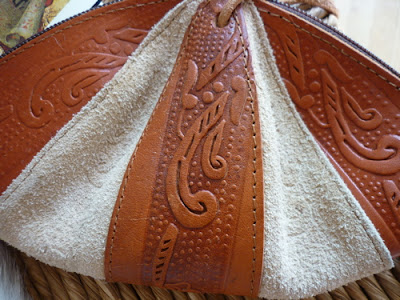 The floss can be separated into singles - oh my poor eyes... 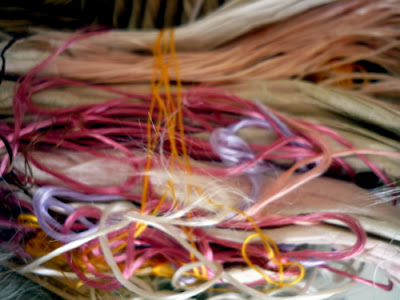 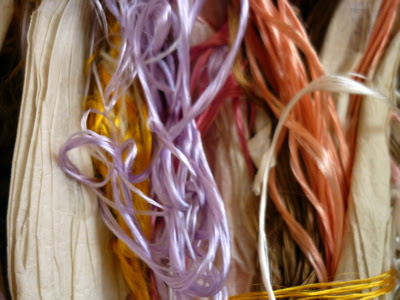 The fur is not a big piece. I haven't made any winter clothing yet. This would be precious for a surcot. 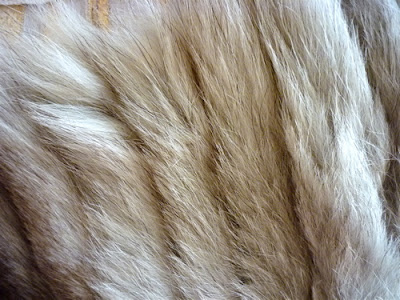 But will you look at this book! It has amazing photos inside, and lots of pictures of just as amazing dress details - quite unintentionally, I am sure, for it is about Austrian Gothic Art. But then, maybe Austrians were already then into clothing (just as they are now). 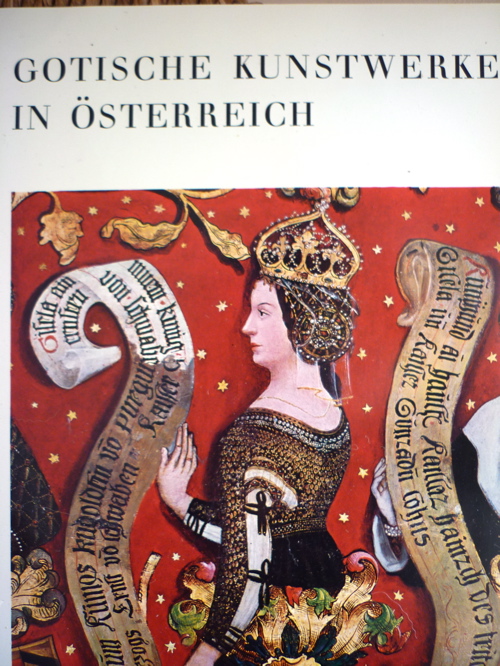 I am working on a theory. Just keep this artwork from early 1500 Innsbruck  in mind ... I'll be getting back to you soon. 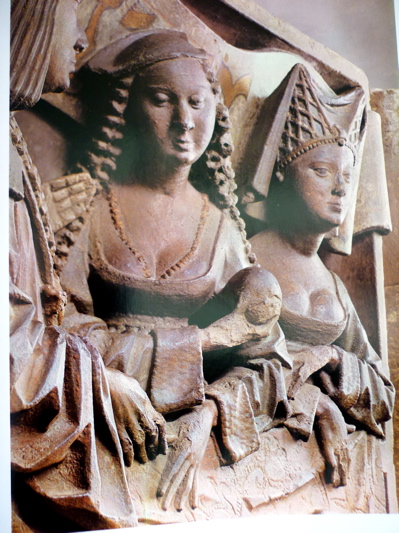 
I have been working on a new hose (a pair of stockings in now-speak) recently. The market date is drawing close and I already start agonizing about having enough to wear.Well,  not really enough, because I do have enough, but having new things to wear, and interesting things. 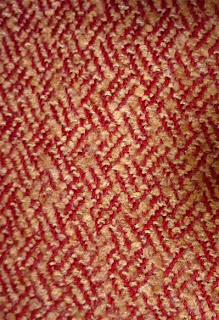 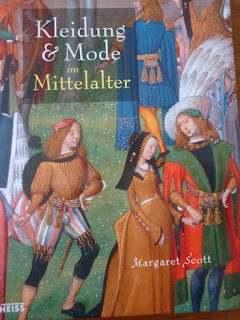 Which made me think.
We try so hard to reconstruct the past. Re-creating the material world of the Middle Ages is challenging, to say the least. How was this sewn? What kind of seam was used? What kind of fabric? What is the proper construction for this time period? And so forth and so on.
But can we recontruct the mental world? How were the Middle Ages really? 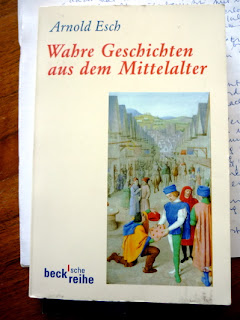 This little book grabbed my attention recently: Real Life Stories from The Middle Ages. The original is German, and I don't know whether it has been translated into other languages. Arnold Esch, Wahre Geschichten aus dem Mittelalter. Beck'sche Reihe, München 2012.
here's a short youtube video about the book


In this book people speak to us through their petitions. 'This and that happened, (but I am not guilty) can I be pardoned?'  That about sums it up. They tell us meticulously how it happened that a baby fell on the steps and died, about fights in the tavern and at the universities, about houses on fire, executions, games ending badly, jokes getting a bad turn. Basically, whatever can go wrong, will go wrong, and we will hear about it through the petitions to the bishop or to Pope.

But why petitions? Why not just make your peace with it, make amends according to your abilities, and be done with it? That's what a modern person would do, or, if the crime was significant, the person would put to prison 'to make amends'.
The Medieval society was very much influenced by the Church, in fact it was penetrated by it. Religiosity determined the mind-set and the rules. You lived to make your life pleasing to God.  This explains the wealth of these petitions: 'please, can we forget about my stupid past deeds, I want my slate to be wiped clean'.

The Medieval society was anthropologically speaking a cold society. Time stood still. In a way time was circular, because you were what your parents were, there was practically no upward mobility, no change. Life repeated itself generation after generation. (more reading)

When looking at such a society from our point of view it is hard to understand what keeps a person in there. Don't they see? Can't they think for themselves? Don't they want to be, um, themselves? Where is their personality, their individuality?

One reason is of course, that one is captive of one's times. No one can escape their times, there is no way out, not even for us.  But think of a circular, cold society - it is a such peaceful and easy place to live. If you live up to the rules, you have security. You have a sense of community and you feel connected. You know what you can expect of life. (Because it won't change. It will be the same as for your parents, and your children will have the same life as you. No aspirations, no struggle... See, easy?)
(We see some religious present-day communities adhere to cold society and circular time, think Amish, Mennonites.)


The fascinating change into our warm society came with the Reformation. No longer were you embedded in a community which told you what to do, you were suddenly on your own. You were demanded to have a conscience and live according to your own conscience. With this development people started to make individual choices. And with individual choices came the responsibility for the choices you were making. Individualism and personal responsibility are two sides of the same coin.

According to Le Goff the perspective started to shift from with the upcoming merchant class. In Early and High Medieval times the production was mainly for use or subsistence. The rise of the monetary economy made broader trade possible, which in turn facilitated the emergence of merchant class. This of course shattered the easy three-tiered society (more reads here) where everyone knew their place. So the shift took us away from stagnating time of church into the progressive time of merchants.

These days we live in a linear time. This means there's a need to plan ahead, to make a series of significant life choices; we are riddled with lack of time and uncertainties. Yet, as a trade-off, we have our destiny in our hands. (Or so we like to think.)

In a lecture this week a professor expressed the view in the Middle Ages there were very little taboos and therefore people were spontaneous. Their mind turned on a dime from being friend to being your enemy, they laughed and cried in public, they would (and here he was referring to royalty) urinate and make love publicly. The process of civilization through the 16th C created taboos and subsequently this public exhibitionism ceased to be.

I am not sure whether I buy into this "medieval people were like children" point of view. It sounds somehow very prejudiced - or is it just me?
Posted by juli at 4:42 AM 2 comments:

I travel an hour to the uni, and spend another hour coming back. It's no fun, indeed it's not. But every time I arrive my heart sings and flutters. 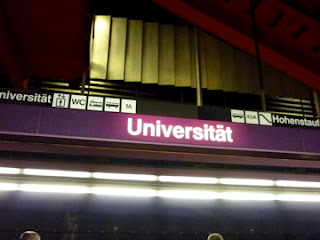 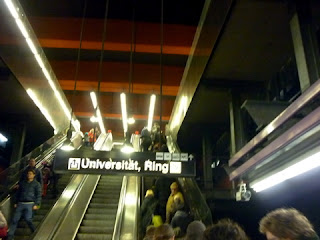 - to arrive at this magnificent round subterranean space that is open to the sky and the elements. 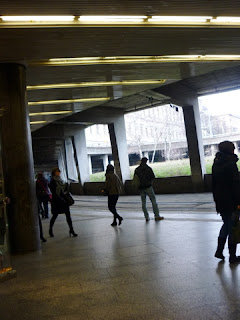 Take another escalator up. 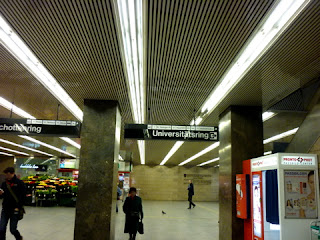 Your first sight of uni is just plain messy. 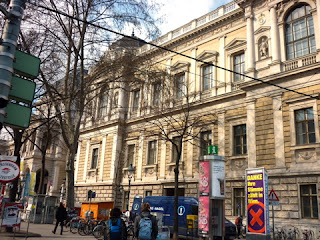 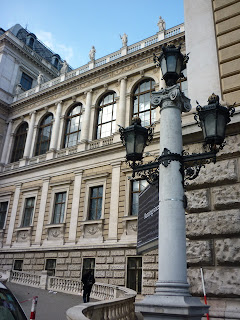 This billboard is so cool. I get a kick every time. They change them, too, it's not just one design. 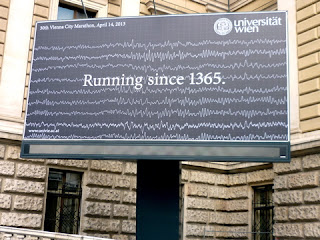 The University of Vienna was founded 1365, and was one of the first German-speaking universities in Europe. This building is however not the original one or even at the original location. I will go to the old place and take some photos some day. 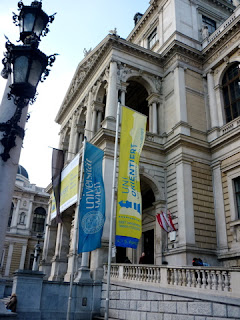 1. where new intentions are announced

Hi to everyone who has started to follow me here. I got really confused and decided I won't be able to cross-post my everyday life and "medieval life" in the same place after all.

Here, I, Adela Vindobonensis (aka Madame Aurora), will start posting about my life in 14th C Wien / Vienna and anything related to it.

(Below are two entries more suited for the new blog, but I have decided to leave them here because of the nice comments.)

hello, who are you?

There are a lot of things that interest me. This is an attempt to corral my interests in crafty areas together with my love for Medieval history. But I do have a wish for Blogger:
it would be so cool to have a couple of different blogs running under the same link. Just imagine, instead of clicking on pages you could click to reveal a blog on Medieval history and crafts, a blog on knitting, a blog on modern day dress and fashion musings... Now it's not possible and I will have to have a knitting blog elsewhere so that this can stay purely Medieval... Have fun anyway and please make my day by commenting! I love to hear from you.
Posted by juli at 11:33 AM 2 comments:

Juli
A student by day and a textile designer by night. After a colorful career including one academic degree, graphic and pattern design and experience as a shop girl I'm back at the Uni, studying History, Social History and Medieval times much preferred.

My Medieval character is Adela, a merchant's wife and peddler of yarns and spinning fibers. She can be seen at markets.

Adela lives in Vienna of the 14th C, she has no last name - yet - but will acquire one in the course of her life.
In a time where family names were non-existent, a byname was a clever way to tell everyone what you were or where you came from.
Many present-day family names in Europe have formed this way.
In Scandinavia, Northern Holland and Germany we see -son or just -s to indicate you were the son of, say Hans: Hansson, Thomas: Thompson etc
There are a lot of family names derived from place names (Tenbrook, Van Arden, Gatsby...) or occupation (Bauer, Maier, Taylor, Gardiner...).
Students and learned men oftentimes acquired a Latin byname. Latin was the common language of church, government and learning. Examples of Latin bynames would be Agricola (tenant farmer, Bauer), Vindobonensis (from Vienna) or Rotarius (Wheeler).

juli
In love with anything historical - clothing included.

in search of knowledge